Hello everyone!  It's that time of the month again for the Sustainable Souls Project.  When I first saw the topic for the month, Fossil Fuels, I first thought of black "muck".  My second thought was of the fossilized bones of some sort of animal.

I visited the wonderful Stencil Girl Stencils website and knew I would be able to find something (because they have every stencil you could ever want and need). I came across the perfect "Fossil Fish Stencil" L094 and knew I could make that my centerpiece.

I rummaged through my stash of cardboard (because every crafter has THAT stash) and cut a piece that was the same size as my other pages.  I applied some Liquitex Gesso to the cardboard and let it dry. 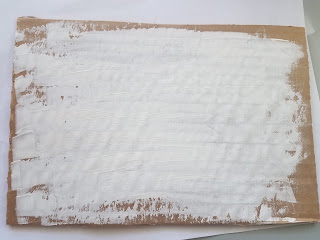 I knew I wanted some crackle, so I pulled out my Antique Silver Crackle Texture Paste from Finnabair and a Pallet knife.  I laid the stencil over the gesso'd cardboard and scraped the crackle over the stencil.  You will see, some of it oozed under the stencil (don't you hate when that happens?), but I went with it and let it dry 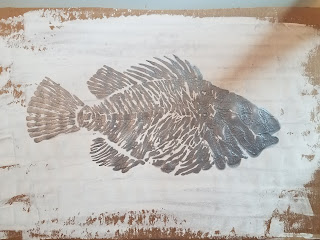 So that I could get my "goopy" black that I envisioned, I messaged my dear sweet friend Susan Brown and asked her if there was a black dye she could recommend for my Amazing Casting Products Clear Resin.  She said "of course", Alumilite has dyes.  Once I got my hands on some, I poured out equal parts of A and B of the clear casting resin, added some drops of the dye to one of the parts (more than I really needed), then mixed them together in a larger cup.  Once all of the bubbles were gone, I gently poured it over my fishy.  Since it was a lot darker than I wanted, I had to scrape it away from the fish so I could see him.  I did like that some of the resin got into those cracks and crevices. 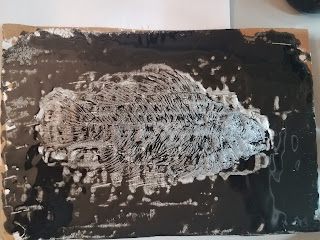 Once this dried, I had to think of a title with my word of the year "Be".  The perfect one came to mind, "Be Efficient".  I grabbed my rub-ons and applied the words to the side.  When we can, we really need to be thoughtful and limit our fuel use, whether it is fuel for your home or your car.  Turn your thermostat down in the winter so it is a little cooler and bundle up with blankets if you need to.  Limit your trips to stores and destinations. 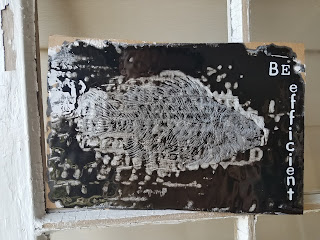 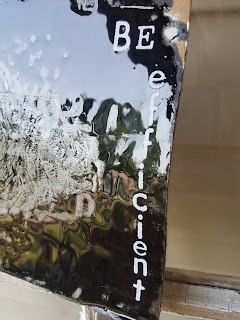 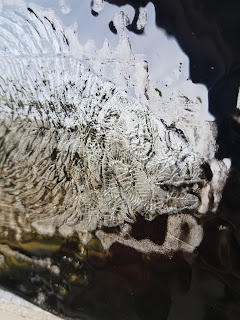 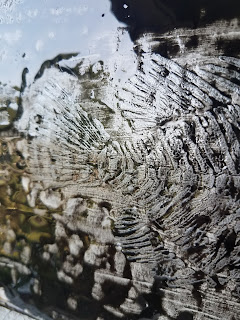 Fossil Fuels are considered a "non-renewable" source because they take millions of years to form and the known viable reserves are being depleted much faster than new ones are being made.  The burning of fossil fuels produces around 21.3 billion tonnes of carbon dioxide per year.  It is estimated that natural processes can only absorb about half of that amount, being a net increase of 10.65 billion tonnes of atmospheric carbon dioxide per year.  Carbon dioxide is a greenhouse gas that increases radiative forcing and contributes to global warming.  A global movement towards the generation of renewable energy is underway to help reduce global greenhouse gas emissions.
Wikipedia.org Fossil fuel 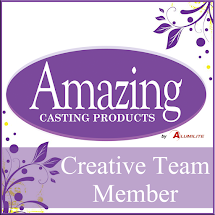 I'm Tracy Krueger and I've always considered myself a "crafty" person. I'm new to the blogging world so Thank you for visiting my world. Even though there may be times where I don't spend tons of time creating, I try to do something every week. I don't really have a "style" but I do love anything with natural color schemes and pops of color. I love antiques and anything rusty! I'm a total introvert so creating is one way for me to open myself up.

There are many creative ladies and gentlemen that I follow and they really inspire me to always try something new and try to step out of my comfort zone. I've attended and try to attend at least one workshop each year to expand my learning and meet new creative souls.

Starting in 2016 I started participating in artist collaborations and this really got me back into the creative mode. One of my goals over the next year or so is to apply for a design team and really put myself out there.

Thank you for joining me in this journey and I hope you keep coming back.